On Tuesday afternoon the Drayton Eagles travelled to Wootton for the top of the table showdown against the only other team in the league with a 100% win record so far this season. As we left school the tension was obvious, but the team were focussed on the task ahead and certainly looked the part in their new warm-up tops, recently purchased so kindly by FODSA. There had been whispers around school during the day about the game resembling the rivalry seen in the Premier League this season between Manchester City and Liverpool.

We arrived to a small pitch but a sizable and intimidating home crowd. Thankfully a number of parents and other family members had made the short trip over from Drayton to bolster our support and create a carnival atmosphere on the sideline. Mrs Hunt was pacing up and down in nervous anticipation as this game meant more to her than any other (ask her, not me!).

The game started with both teams trying to suss each other out. Drayton had more of the ball and were playing some beautiful passing football, but Wootton posed a real threat with some very strong, skilful and quick players of their own. Drayton team captain Ethan was back in the side after recovering from injury and he marshalled the defence brilliantly alongside the ever present Alex. There were early chances at both ends, with Harry M making a couple of incredible saves for the visitors and both Finlay and Jamie going close at the other end. Lily was playing the N’Golo Kante role superbly, covering every blade of grass and breaking up play effortlessly. There was one flowing move in the first half in which the whole team was involved, passing from back to front at speed and opening up the opposition only for Jamie to fire wide, when he would usually hit the back of the net. There was a lot to be impressed with and the away fans showed their appreciation to the team as the half time whistle sounded. The sides went in 0-0 at the break with all still to play for.

Harry A came on to replace Lily, with Ethan shifting further up the pitch. The defence remained solid, with Charlie and Wyatt creating chances at the top end of the pitch and tracking back well when out of possession. A string of corners followed for Drayton but with no end product, and the game began to open up as both sides went in search for goals and glory.

With 10 minutes remaining a long ball over the top was missed by the Drayton back line, leading to Harry A having to attempt a last-ditch sliding tackle. Unfortunately, he caught the attackers’ leg before the ball, resulting in Mr Pear, acting as a totally unbiased referee, pointing to the spot. The penalty was dispatched by the Wootton striker leading to wild celebrations on the sideline.

Drayton had under 10 minutes to find a reply and save their title challenge… and that is exactly what they did. From that moment on the game really opened up with Drayton having to push players forward in search of goals. Within 3 minutes they were level. A long ball forward, kept alive by Jamie was controlled and cut back across goal where Charlie was waiting in the perfect position to smash the ball past the Wootton keeper and bring the scores level. The game was being played at a frenetic pace and chances were still coming at both ends. Harry M excelled himself again, standing up and blocking when faced with a one-on-one. A quick bowl out from the keeper led to another quick break with Lily hitting a rasping shot across goal, only for it to cannon back off the inside of the post. With only 3 minutes left on Mr Pears retro Casio watch and both teams understanding the importance of the game, the season defining moment came. Jamie broke free of the Wootton defence after a ball through from Wyatt and lashed past the stranded keeper into the back of the net. The whole team ran and celebrated in front of their adoring supporters with Mr Pear having to reign in his excitement and pretending to remain impartial!

The final 2 minutes were nervy with one chance still to come for the home side. An indirect free kick was floated into the crowded box, but there was Minter again, rising above the crowd like a salmon to gather and cling onto the ball as though it was the league trophy. He wasn’t going to let that go and the Drayton rear-guard held firm to record a memorable victory and keep their 100% league record intact.

It has been an incredible first season for Drayton in the Abingdon small schools league, with the whole squad chipping in. The team has a 100% win ratio and have played every single game in the right spirit, being an absolute credit to the school – playing some brilliant football in the process. Well done to everyone who has been involved this year. 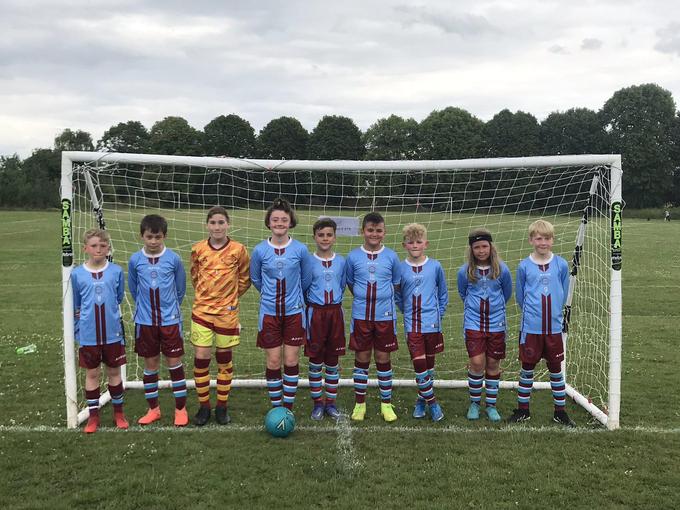